Since 1954, Hampton Nautical is the premier designer and manufacturer of the worlds finest wholesale nautical decor, wholesale cast iron and wholesale Nautical Bells.

Hampton Nautical provides the highest quality wholesale home decor and wholesale Nautical Bells at the lowest prices with a 100% money back guarantee. 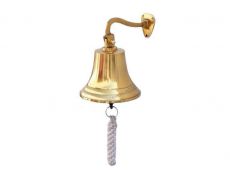 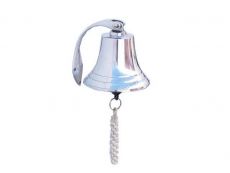 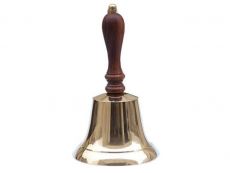 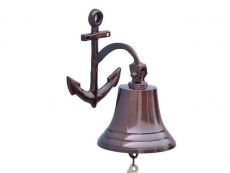 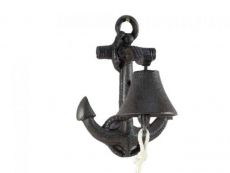 Nautical bells serve a special purpose aboard ship: they indicate when its time for a shift change as well alert the crew to listen for announcements. Perfect indoors or out, our line has every nautically themed bell you could think of: nautical brass bells, chrome bells, copper bells, boat bells, small bells, and hanging bells. Handcrafted Nautical Decor is where to buy a bell. These elegant, decorative and fully functional bells make an excellent addition to any collection and add a touch of nautical sophistication to any home.

Handbells make attractive additions to a collection of nautical décor, either lying or standing on a table, shelf or desk among other collectibles or antiques.

Mounted brass bells make a fine addition to adding a nautical feel to a room, but are entirely functional as well for use in any outdoor location, from a patio to a yacht.

The art of bell-making, also known as bell casting or bell founding, is not an easy one. To achieve a proper tone, bells must be cast according to precise dimensions and mathematical formulae. Bell makers were among the most proficient metal smiths of their days, and from the invention of the classical European bell in the 4th or 5th century, through the Middle Ages, it was a time of great celebration when a town or village successfully cast a quality bell (often after several failed attempts).

This difficulty in manufacture made a bell a valuable item to be placed aboard a ship, and ship's bells were often cast for a specific ship, with the name of that ship engraved upon it. In this way, a ship's bell came to symbolize the heart, soul, and spirit of the ship itself. Damage to a bell, or worse the loss of a bell in a storm or battle, was seen as a terrible omen by a ship's crew, and ship's bells were often saved from sinking ships, or later recovered from the sunken hull. In many cases, the name inscribed upon a ship's bell is the sole method for identifying a shipwreck.

A handbell is used primarily for signaling, and a ship's captain or officer might ring one to summon an aide or attendant to their cabin or for a similar purpose. A ship's bell, however, served many key purposes and was a vital instrument in maintaining proper organization and functioning of a ship at sea in the age before modern timekeeping and technological methods of communication.

Steady ringing of a ship's bell indicated an emergency, to which all hands would immediately respond. An outbreak of fire, sudden engagement in battle, or an accidental grounding that threatened to sink the ship were all circumstances that might result in constant ringing.

Another type of signaling for which a ship's bell was used is a slower but steady ringing of a positioning signal. In the dark of night, when surrounded in fog, or under other conditions where visibility is limited, the ship's bell can be rung intermittently as a signal to nearby crafts identifying the boat's presence and position.

More commonly, however, the ringing of the ship's bell occurred simply to keep the time. Crews aboard a ship normally work in watches lasting four hours, during which they are responsible for all the duties of operating the ship. The bell is rung in a progressing count from one-bell to eight-bells (normally in sets of two rings) every half hour, with 8-bells signaling the end of a watch period. Sailors thus marked time in terms of watches and bells.

With the advent of modern timekeeping devices such as wristwatches and electric clocks, as well as technological communication devices like loudspeakers and public address systems, it is no longer necessary to ring a ship's bell as a matter of timekeeping or to maintain a watch schedule. However, even on the most advanced modern warships, the ringing of bells remains an enduring nautical tradition. It is not uncommon for the ringing of eight bells to occur at the funerals of career sailors, symbolizing that their watch has been completed.