Since 1954, Hampton Nautical is the premier designer and manufacturer of the worlds finest wholesale nautical decor, wholesale cast iron and wholesale Telescopes/ Spyglasses.

Hampton Nautical provides the highest quality wholesale home decor and wholesale Telescopes/ Spyglasses at the lowest prices with a 100% money back guarantee. 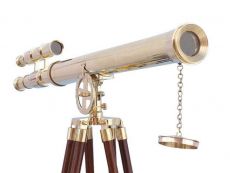 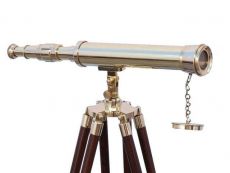 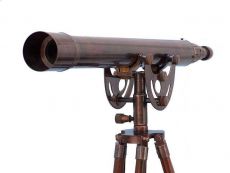 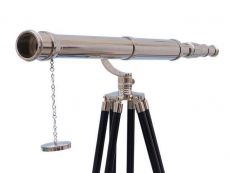 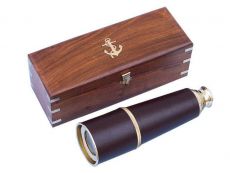 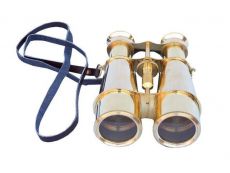 From the "Land-ho" yelled out on Christopher Columbus's Santa Maria, to "Iceberg, dead ahead" yelled from the Crow's Nest of the Titanic (whose lookout, we now know, was working without binoculars) the most exciting images from nautical history often come just after someone surveyed the horizon. Who could forget British Admiral Horatio Nelson famously "turning a blind eye" to his order to retreat (relayed via signal flag) by holding his Admiral's Brass Telescope up to his sightless right eye and declaring, "I can not see it." Handcrafted Nautical Decor carries a full line of nautical decor including: brass telescopes, floor standings telescopes, spyglasses, brass leveling instruments, binoculars, and chrome telescopes. What vital piece of information will be revealed to you when you peer through the lense of your very own brass spyglass / hand telescope?

The ability to clearly see distant objects is not just a matter of curiosity for mariners, but a vital safety concern. The invention and development of telescopes, spyglasses and binoculars enabled sailors to locate and avoid navigational hazards, identify stretches of coastline for ports or landmarks, and discern friend from foe open the open seas, all while remaining safely at a distance.

Handcrafted Nautical Décor is pleased to offer a fine collection of fully functional and extremely beautiful spyglasses, telescopes and binoculars. Crafted of solid, polished metal with real glass optics, these exquisite pieces make a lovely addition to any collection of nautical décor.

Although the first telescopes were invented at the start of the 17th century, many of the basic principles of lenses and optics were known from antiquity. Ancient Mesopotamians, Egyptians, Indians and Greeks polished quartz lenses and studied the nature and physical properties of light. By the Middle Ages the properties of magnification were well understood and reading stones placed upon a page allowed people to clearly read small lettering.

The problem of how to clearly view distant objects eluded inventors until refinements in glassmaking as well as precision lens grinding and polishing enabled the routine use of glass lenses in the making of spectacles. Several Dutch inventors, mostly spectacle-makers, all claimed to have created working telescopes within weeks of one another, and famed astronomer Galileo Galilei invented his in a single night after simply hearing a description of the Dutch perspective glass. Galileo went on to significantly refine the design of the telescope, with further improvements suggested by Johannes Kepler.

Early work in telescopes remained the province of astronomers who pointed them towards study of the stars and planets. Part of the reason for this is because the problem of chromatic aberration in which various colors of light refract at different angles through glass. Large lenses with long focal lengths minimized this problem, but required that telescopes be extremely long, often so large that they required scaffolds to support them and could be misaligned by a strong breeze.

It was not until the mid-1700s that the idea of using multiple lenses of different types and materials to correct and refocus the refracting colors was perfected in the achromatic lens. Perhaps the greatest single leap forward in the development of the telescope, the achromatic lens not only produced a clear image but also finally made short focal-length lenses an option, allowing the construction of small but high-powered hand-held telescopes.

Improvements in the optical refracting telescope continued, but the basic design and technology changed little from this time on. Mounted telescopes or hand-held spyglasses, as well as their cousins the binoculars, could now go anywhere and be used by anyone. They quickly found their way into the hands of naval and maritime officers aboard ships, where they proved vital tools for safety and security at sea.

Using a telescopic viewer, a lookout could see from a distance evidence of dangerous reefs, rocks or shoals that might endanger a ship. A navigator might spy a distance coastline landmark for reference against nautical charts to determine the ships precise position, while the captain could read signal pennants and receive messages from distant friendly ships or recognize the flags of an approaching vessel and determine any hostile intent before they came close enough to be an immediate danger.

Meanwhile, powerful telescopes mounted ashore allowed watchers to scan the seas for eagerly awaited inbound ships. A harbor master could maintain better watch over the boats approaching his port and manage the assignment of pilots to guide them into the docks while reducing risk of collisions. Atop a lighthouse, a keeper could search for evidence of accidents, wreckage or survivors following a stormy sea or fog-shrouded coast.

These examples are but a few of the many uses to which mariners and others routinely put telescopes to work.