Since 1954, Hampton Nautical is the premier designer and manufacturer of the worlds finest wholesale nautical decor, wholesale cast iron and wholesale Ship Wheels.

Hampton Nautical provides the highest quality wholesale home decor and wholesale Ship Wheels at the lowest prices with a 100% money back guarantee. 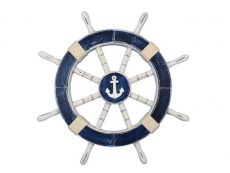 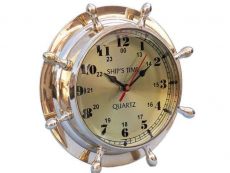 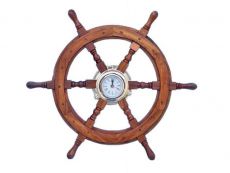 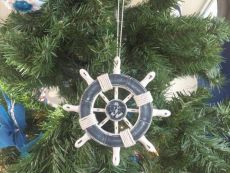 Evocative and iconic, the wooden ship wheel is a true symbol of sailing. Ship wheels served as the steering wheel of a boat for centuries, are their icons of the sea. Handcrafted Nautical Decor is pleased to offer a wide array of fabulous ship wheels to serve as nautical wall decor including brass and wood ship wheels, black lacquer pirate ship wheels, ship wheel decorations, and decorative ship wheel clocks. The ships wheel is a piece of nautical home decor you can't afford to pass up.

Few images are more evocative of a ship than that of a ships wheel. With a design essentially unchanged for centuries, this icon of nautical design can be found on classic tall ships, modern steamship, private yachts, naval warships and everything in between. As a symbol representing the skill of able seamen and navigators the ship wheel is proudly emblazoned on seals, insignia, and emblems worldwide.

Handcrafted Nautical Décor is please to offer a wide array of ship wheels and ship wheel décor. From authentic ship wheels in a variety of sizes to wheel-mounted clocks, from desk and office accoutrements to playful beach décor, we offer selections suited to every purpose.

Early ship wheels were put in use by the British Royal Navy shortly after 1700, and have remained largely unchanged in design since their introduction. Instead, advances in helm technology have focused on the mechanical connection between the wheel and the rudder, improving both the degree of control and the amount of power available to the helmsman to control the vessel under any type of conditions.

Prior to the invention of the ship wheel, control of the rudder (and thus steering of the ship) was achieved by the use of a tiller. Still used on smaller watercraft, a tiller was nothing more that a horizontal pole attached to the top of the rudder. Pushing the tiller left (port) caused the rudder to rotate right and thus turn the ship to starboard, and vice versa. In a small sailboat or motorboat the tiller might be small enough to be operated one-handed by a single passenger, while on a large sailing ship it could be quite long.

As the size and bulk of ships grew throughout the Age of Sail, the disadvantages of the tiller became significant. First, it was connected directly to the rudder (perhaps via a vertical riser pole known as a staff) and operated as a level. As ships grew in size and bulk they generated greater inertia and with more masts and sails their speed and momentum increased. The only way for helmsmen to gain more strength against these forces was to lengthen the tiller, consuming valuable deck space and requiring a wide arc of swing that might exceed the width of the ship.

While several sailors could assist the helmsman in pushing the tiller to one side to steer the ship, they would need to maintain constant pressure, which could be tiring, and a solid footing beneath them, a difficult task on the deck of any ship but particularly a problem in storms or heavy seas. Changing course might mean having men switch sides of the tiller, and if they lost control of the tiller then it could sweep powerfully across the deck and injure or kill any sailor unfortunate enough to be caught in its path.

The introduction of the ship wheel eliminated many of these problems and hazards. Removed from direct connection to the rudder, the helmsman gained the mechanical advantage of gears or other systems to put more power into controlling the rudder and steering the ship. Since he no longer needed to move with the swing of the tiller, the helmsman could stand safely in one place, and in rough or stormy seas even be literally lashed to his post and still maintain control of the ship.

In the event one helmsman alone could not turn the ship others could join him at the wheel, and if needed multiple wheels could be joined along a common axle to enable many sailors to assist in making rapid course changes in strong seas. Even such a multiple-wheel arrangement took up less room on the decks than would a tiller, and if the helm crew lost control of the wheel and it began to spin freely they need do more than take a single step back to remain safe. Otherwise, holding a course with a wheel required less physical effort than with a tiller, and the many spokes and handles of the wheel allowed it to be more easily lashed in place to maintain a specific course for an extended period of time than a tiller could be, thereby proving less tiring to the helmsman.

With the invention of modern, power-assisted systems the job of the helmsman was made yet easier. Whereas the ship wheel had broken the tillers direct connection to the rudder, powered systems separated the wheel mechanically. The helm could now be placed in any location within the vessel, or there could even by multiple helms (such as a wheel-house as well as a flying bridge) from which to control the ship. The wheel simple gave instructions to the pneumatic or hydraulic systems that would themselves turn the rudder, and now a single helmsman could steer the ship under any conditions.

Despite all of the advances in technology from the Age of Sail to the present, even in a modern age where the steering of a ship could easily be controlled from a slider, knob, toggle, joystick, dial or even a computer mouse, the ship wheel remains an enduringly functional and iconic fixture aboard all sizes of vessels from small pleasure boats to massive commercial freighters.