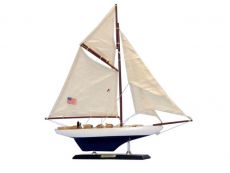 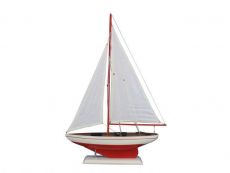 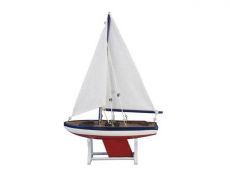 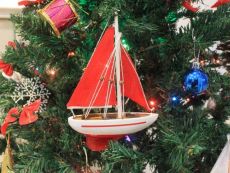 Basic sailing ship models are available in a wide range of colors, enabling them to match the décor of any room. They are a perfect addition to any seashore or beach décor theme, and make great gifts. Display them in a bedroom, family room, sunroom or liven up an office with their fun and playful presence. These models also make excellent themed centerpieces of events and receptions.

Fine-crafted décor yachts models add a touch of class and a nautical flair to any room with their quality workmanship. They combine elegance with a subtle presence that makes them an ideal addition to family rooms, dens or offices, as well as meeting rooms and other common areas.

Premium-quality replica yachts are produced with exquisite details to appeal to collectors and yachtsmen alike. These museum-quality model yachts are crafted to the highest standards, delivering an enviable display that will be a highlight of any rooms collection of nautical décor and artifacts.

Recreational sailing is a sport and pastime enjoyed by people around the world. Docks and marinas may be found along any stretch of coastline, lakeshore or riverfront, offering both coastal and inland enthusiasts the opportunity to take to catch the breeze and take to the water.

Historically, sailboats have been working boats for millennia. While royalty, nobles and aristocrats may have occasionally maintained vessels for personal use, these were primarily barges, such as the famous pleasure barges of Queen Elizabeth at Leichester or Queen Cleopatra on the Nile, intended for lakes or rivers. Sailing remained a difficult and dangerous business, and boating an occupation for the working class.

The coming of the steamboat and the Industrial Era changed the status of the sailboat from working vessel to pleasure craft. Increasingly powerful steam (and later diesel) engines rendered sails obsolete within a matter of decades, while advancing production technology enabled the construction of inexpensive sailboats on an industrial scale. Sailing was rapidly transformed in the common view from a profession to a pastime, and simultaneously the cost of purchasing a small boat became increasingly affordable for the middle-class.

As the middle-class enjoyed recreational day-sailing in small boats, certain types of large sailing ships, such as the windjammer class of ocean cargo ships or many fishing and whaling trawlers, continued to operate as working vessels. Meanwhile, the wealthy upper-classes turn their attention to the intermediate and rapidly expanding class of boats known as yachts.

Jacht was a Dutch term originally referring to a class of light, fast sailing ships used by the Dutch Navy to pursue pirates and outlaws in the shallow waters of Holland and the Low Countries. Similar vessels also served as customs inspectors or pilot boats, and when merchants recognized the speed and ability of these small boats to intercept larger tall ships at sea, they became to build private yachts in order to greet their inbound trade ships. Other wealthy individuals began building jachts for pleasure trips, which attracted the attention of King Charles II of England in the mid-17th century. When the king chose a jacht for his official conveyance back to England for the Restoration in 1660 following the English Civil War, the term yacht entered the English vocabulary.

Charles II had become an avid sport sailor during his time in the Netherlands, and commissioned the construction of an additional 24 royal yachts throughout his reign, sparking an interest in yachting among English aristocracy. Yacht reviews and regattas were already common in Holland, and these events passed to Britain and then spread throughout the aristocracy of mainland Europe. Yachts varied greatly in size, from small private pleasure boats to larger royal yachts to Dutch military vessels approaching the scale of 6th and 5th Rate ships-of-the-line.

In common use, however, the term yacht as understood in Britain and spread to continental Europe and the Americas signified exclusively pleasure craft with no commercial or military function. Yacht clubs formed where members could sail, display and race their yachts. One such race was held in 1851, sponsored by the Royal Yacht Squadron as their annual circumnavigation of the Isle of Wight. Fifteen English yachts participated in the regatta, joined by a single American entrant.

Appropriately named the America, this racing yacht was commissioned by members of the fledgling New York Yacht Club and designed as an over-sized pilot-boat. When the America bested her competition in the 53-mile race by finishing 8-minutes ahead of her nearest competitor, Queen Victoria is said to have asked the name of the second-place boat and received the famous reply, Ah, Your Majesty, there is no second.

The winning yachtsman returned their trophy to the New York Yacht Club, renaming it the Americas Cup and bestowing it to the club via the Deed of Gift. Other clubs were now able to challenge for possession of the Cup, and Americas Cup challenge races quickly became the most prestigious in yachting. Today it remains the oldest active trophy in international sport, successfully defended by the New York Yacht Club for an astonishing 126 years until the Royal Perth Yacht Club achieve victory with the Australia II, thus ending the longest winning streak in sports history. American yacht clubs have since twice reclaimed the trophy, and it has been held once each by clubs from New Zealand and Switzerland.

Not all races consisted of pleasure boats or purpose-built racing yachts. Throughout the late 19th and early 20th centuries, sailing ships still labored in certain professions, with the professionalism of the crews as well as a the speed and handling of their boats a matter of pride. Working vessels participated in races as well, such as competitive trade-runs by clipper ships or off-season races between working fishing boats. Among the latter, in the early 20th century Canadian schooner Bluenose from Nova Scotia held the International Fishermans Trophy against all challengers for 17 straight years, while also winning awards for the largest catch of the season and similar honors as an actively working fishing vessel.

With the advent of diesel powerboats, the last of the working sailboats faded into history. Modest yachts continued to become increasingly affordable for average owners, and the pastime of pleasure-boating increased in popularity. With the addition of inboard engines, yachts could now be enjoyed regardless of weather conditions as either sailed or powered vessels.

Still, to many sailing enthusiasts there is no greater joy that taking personal control of a one-person dinghy and harnessing the wind. Sailboats, whether large or small, are a heart-felt passion for millions and an icon of any day at the seashore.